Book FREE TOUR SULEYMANIYE MOSQUE to enjoy a guided tour of Suleymaniye Mosque and the neighborhood for free. Join us for a fascinating tour with local expert guides!

When you arrive at the meeting point, look out for the red umbrellas. Our free tour guides with red umbrellas will be waiting for you in front of the Sirvan Restaurant. The free tour of Suleymaniye Mosque runs every day in all weather conditions, rain or shine.

HIGHLIGHTS OF THE TOUR

DISCOVER MANY FACES OF ISTANBUL ON FREE TOUR SULEYMANIYE MOSQUE

Free Tour Suleymaniye Mosque is a great chance to discover many faces of Istanbul. You will take a step back in time to the days of the Ottoman Empire and discover the life of Ottomans in the reign of Suleiman the Magnificent.

While visiting Suleymaniye Mosque, you will hear stories about Suleiman the Magnificent and his true love Hurrem Sultan. On this tour, you will also have the excellent chance to visit another Ottoman mosque, Rustem Pasha Mosque. You will be amazed while listening to the life of the Ottoman imperial architect, Mimar Sinan who built both mosques.

During your free tour, you will visit two mosques: Suleymaniye Mosque and Rustem Pasha Mosque. Both of these mosques were built in the reign of Suleyman the Magnificent and they were built by the most famous Ottoman architect Mimar Sinan.

Suleymaniye Mosque is a few miles away from the Sultanahmet district. It is the largest imperial mosque in Istanbul. It’s one of the most fascinating mosques in Istanbul with its breathtaking view of the Bosphorus from its garden. The Bosphorus view here is second to none in Istanbul. Inside the mosque, you will marvel at the beautiful decorations such as the floral designs, geometrical patterns and calligraphy from the Koran.

Another stop during free tour Suleymaniye Mosque is Rustem Pasha Mosque, another Ottoman mosque designed by the imperial architect Mimar Sinan. The mosque takes its name after the husband of Mihrimah Sultan, the only daughter of Suleiman the Magnificent. When Rustem Pasha died, Mihrimah Sultan commissioned a mosque in her deceased husband’s name to honor his contributions to the empire as a Grand Vizier. This mosque is famous for its greatest collection of Iznik tiles.

Learn about Suleiman the Magnificent and his chief architect Mimar Sinan

On the original free tour of Suleymaniye Mosque, you will hear great stories about Suleiman the Magnificent also known as the Lawgiver for his reconstruction of the Ottoman legal system.

You will learn the history of his relationship with his true love Hurrem Sultan. You will be able to see the tombs of Suleiman Magnificent and Hurrem Sultan as Suleymaniye Mosque is their burial place.

Keep in mind that one cannot fully understand the reign of Suleiman Magnificent without grasping the splendor of the works of his chief architect, Mimar Sinan.  The works of Mimar Sinan shows the wealth and power of the Ottoman Empire during the 16th century. On free tour of Suleymaniye Mosque, you will hear about the life of Mimar Sinan who is known to transform the panorama of Istanbul with his masterpieces. You will witness three of his architectural works on your free tour: Suleymaniye Mosque, Rustem Pasha Mosque and Cemberlitas Hamami.

Marvel at the historical landmarks in the neighborhood

During your free tour of Suleymaniye and neighborhood, you will get a great chance to see some of the oldest structures in Istanbul. The first of these structures is the famous Column of Constantine, known as Cemberlitas in Turkish. This Roman monumental column was built for the Roman Emperor Constantine. Erected in 324, this column is one of the oldest Constantinian monuments in the city of Istanbul.

Your free tour guide will show you another hidden gem on your way to Suleymaniye Mosque. You will see Cemberlitas Hamami, a historical Turkish bath which is built by Mimar Sinan in 1584. Here, you will hear about the traditional Ottoman bathing rituals.  You will get tips to book a session to enjoy a session of Turkish bath.

During your walk, you will pass by the Grand Bazaar, one of the biggest and oldest covered market in the world. The bazaar has 61 streets with over 4000 shops. Your free tour guide will share tips to avoid getting lost in its narrow streets.

There are no reviews yet. 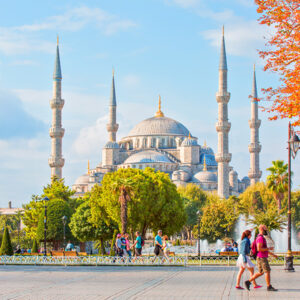 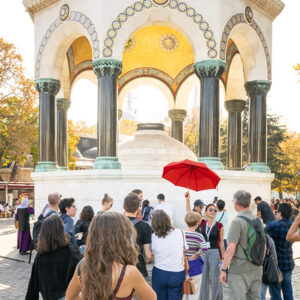 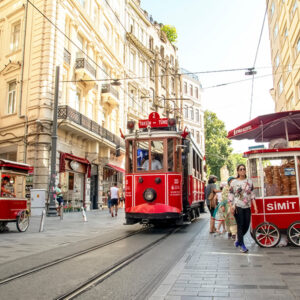 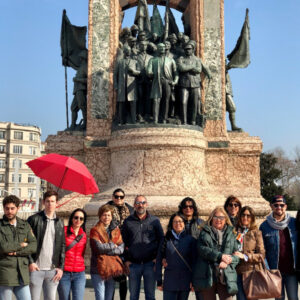 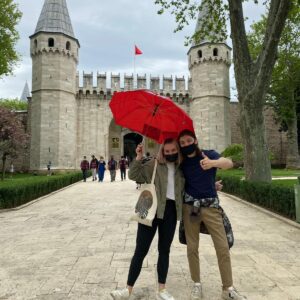